Numerology and Destiny Number
From the dawn of time, man has used numbers to better interpret the world around him. Numerology and numbers are based on the belief that the name you received at the time of your birth coupled with the date, month and year, influence your character, determining what will happen in your life. The future is in your hands with Numerology: discover your destiny numbers!

Once you have found the numeric results of your name and date of birth, you just need to add them again and you will get a single number by using the previous method:

Number one indicates someone who will have many unforeseen events in their life, will tend to be incoherent, will want to do many things at the same time and will react in an unusual way to daily events. In general, number one will fulfil himself or herself late in life but will manage to have stable, loving relationships from the start.

The personality of number two will be characterised by great incertitude and indecision, he or she will often commit the same errors as they are prone to repeating their experiences on a cyclical basis. They are gifted with notable intellectual capabilities, are prone to being positive and constructive but this comes at a cost due to their indecision. In general, number two characterises an extremely loyal and sincere personality who often can't say no.

Number three will have sudden moments of luck both at work and in their romantic lives. Moreover, they will do a great deal of travelling and will get to know a whole host of cultures and people from other countries. They are prone to tolerance, have a great deal of respect for others and will always have something new to do.

Number four will have many loyal friends who are willing to help and advise him or her (Friendships are favoured). They will manage to fulfil themselves at work, slowly but surely. They will come across initial difficulties in relationships but these will be successfully overcome.

Number five is characterised by strong confusion and the conviction of always being right. They can expect unstable levels of intimacy and their emotions invade their daily life. In general number five is prone to worry, but, when necessary, can control himself or herself.

Number six will have to keep his or health under control, avoiding everything which is harmful. Wisdom and awareness is necessary and they need to think before making a choice. In general, number six will achieve has or her aims but almost always at a cost.

Number seven will achieve his or her ambitions and will always feel at ease in any situation. Therefore we can say that those with this number of destiny will fulfil their desires in life, always accompanied by luck ad fate will always have some new opportunities to improve his or her position. The only deterrent: the possibility of becoming selfish. In general, number seven has great depth of soul and fate is on his or her side.

Number eight is characterised by the fact that he or she always manages to overcome daily problems with great serenity. He or she always finds a solution. They are not instinctive in general but bad moods could lead to contrary effects. This may not be seen in a good light by others and he or she may be criticised for his or her attitude.

Number nine is predisposed for art, music and literature. Sometimes his or her feelings are aesthetic therefore this is an extroverted subject, pleasant, with leanings towards adventures and travel. Important friendships will help them affirm themselves in their social life, an area where they will become the boss. In general, number nine must keep his her futile spending under control and the financial side in general.Numerology is becoming increasingly popular but it constitutes an ancient tradition which has interested the greatest minds but also common folk. This was known in ancient Greece and in China, Egypt and ancient Rome and was even used in the centuries before the period of Pythagoras even if Pythagoras ( philosopher and mathematician) is considered the father of Numerology.

According to great numerologists, everything in our midst can be reduced to a single number, the destiny number which has a very precise destiny. In numerology, every letter of your name, given a numerical value, adds to your date of birth to get to a final number which describes perfectly your personality or the path your life will take. So, by finding your destiny number, you will be able to fully understand your essence, learning to face daily realities with more determination and clarity. The numbers corresponding to birth are called "destiny numbers" and provide indications on a person's future, including yours!

To win the lottery many and complicated cabals have been reedited with alternate results by famous astrologers, like Rutilio Benincasa born in Tursano, province of Reggio Calabria in 1555.
He became very popular especially in Sicily where all the cabalists from the first to the last know Rutilio Benincasa and almost everyone calls him "Rutiliu", says the historian Giuseppe Pitre, identifying the name of the author with the name of his manuscript. In reality the book which seemed to have been for many years the bible of the players or the popular astronomical almanac of Rutilio Benincasa had nothing to do with the lottery at least not in its original version, but it is about the signs of the Zodiac the effects of the moon on the tides winds and the navigation.
The book cited by Pitre is probably not a pure manuscript, enriched with elements of geometry for divinatory use by unknown hand. More than a literary myth, that of Rutilio’s, whose presumed cabalas are still being printed after the modern editions of "Smorfia".
To the astrologer from Calabria or to his mysterious forger is due the credit of sensing the most important rule of the most frequently drawn numbers according to which a kind of magic of similarities ends up showing the other, as if some numbers area linked between in certain most frequently drawn series. Regarding the popularity of Rutilio, there is a curious contradiction that did not spare the strictest censor of the Lotto, the lawyer of the Roman church-Pietro Pompilio Rodota, who in the book named "About the games of the sector, the fate and mysticisms" of 1769 first uses fiery words against the cabalas defining them "childish", "arbitrary" and full of whims and misunderstandings and then having to deal with him, who claimed to be the master, Rutilio, softens the throw, calling him "Excellent philosopher mathematician and astronomer".
Whatever it is at this point the reader will want an example out of curiosity. Here is a presumably rutilian rule, designed to draw the most frequently drawn number for any month. I faithfully pass it to you the way it was passed by the astronomer, physicist and cabalist from Venice Pietro Casamia: "To do this operation, that is to have the real monthly most frequently drawn number, would be good first of all to know how many days has the moon got on that first day of the month we want to do."
In our case we will calculate that number for the month of June 1784 and we will see in the course of the moon in my astrological circle that in my calculations I think the most probably we will see thirteen days of the moon on the first day of June, and having certified this we will check the algebraic tables of two luminaries, e.g. the sun and the moon and will go to the 13° showing the course of the moon, we will find respectively the three numbers 79, 12 and 86 and with these three numbers we will make a pyramid, with taking out as per usual in the art of the cabala 9 as follows: 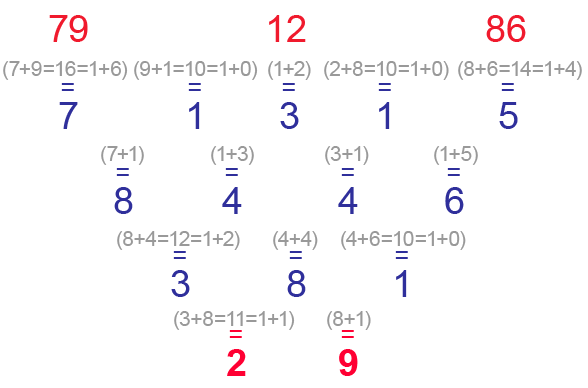 Rules like the one make up only a small part of the infinite series that the multitude of cabalists have thought out in the course of the centuries. More and more complicated systems that people had trouble understanding, preferring the art of "the assisted ones" that did not require the knowledge of mathematics nor astrology, but mostly were going back to "Smorfia". This way with passing of the centuries the nineteenth century saw the descent of the last cabalists stuck to a science that was locked up in itself and impossible to develop. During the first years of this century in Naples the last cabalists were spending their time sat in coffee shops amidst the mockery of the "assisted" ones who only needed a nap to receive a few good numbers.

The stars talk about you...

For the new year, plan ahead! Consult the Arcanes of the Tarots of Predictpod! This will be a year full of surprises! Some will find love, some money and others will be kissed by luck…and you? What 2022 will bring you is already written in the stars. Discover what is on the cards and get your news in advance!

Let yourself be captured by the fragrance of Planetary incense! Making planetary incense is really easy: Predictpod provides you with all the necessary ingredients to help you discover the pleasure of relaxation! Did you know each planet has its own incense? Discover yours!

The Personal biorhythm is the combination of activities and biochemical, physiological and compartmental processes which occur in all living organisms with constant and unchangeable periodicity. Get your Biorhythms for free.

We also talk about...

Making investments is so tiring! Every time you feel a doubt and don't know if it's the right time to play on the Stock Exchange, you can count on your Business Horoscope! You will receive personalised advice to solve any financial problem. Business no longer rhymes with stress with Predictpod!

Mineralogy is now a science which many trust in to discover the benefits which stones and gems can give. Did you know there is a special gemstone for every sign of the Zodiac? Read immediately what yours is with the section dedicated to the Signs Birthstones! Ruby or Emerald? Discover with a click!

What do you know about Numbers?

Are you getting confused? Numerology will help you understand what are the right numbers for you! The science of numbers will have no more mysteries thanks to the sections dedicated to Numerology: you will finally be able to make the most of the knowledge which Predictpod has set aside just for you!

Did you Check your Horoscope for Tonight?

Are you wondering what to do tonight? Don't rack your brains too much and listen to the advice of the Stars! The Stars are here for you to make amusing forecasts on your evening. In company or alone, make your evening unforgettable with the Stars' suggestions offered by Predictpod and read your Horoscope for Tonight.

This week - Tarot and Zodiac Signs

What do you know about Numbers?